For the benefit of my new international subscribers, this post will be in English. As I am currently in Greece, I have sampled four lagers/pilsners readily available in the supermarket. My expectations were not high but here we go:

Mythos, 5% lager from Mythos Breweries (owned by Carlsberg, so we do have a Danish responsibility). Very pale appearance, clear liquid with a nice white foam. The smell contains bread notes and some maize (dimethylsulfide). The taste is of bread with some corn sweetness and a very slight citrusy note. The bitterness is quite low. A standard generic lager which only rates with 2 skumfiduser.

Fix Hellas, 5% lager from Olympic Brewery. Also quite pale colour of the clear (filtered) beer with white foam. Breadish fragrance with a hint of some hop aroma. A little bit more malty than Mythos and a more pronounced corn flavour. The bitterness is a little higher in this second beer. Overall, it is a good representative of lagers, and if you do not want to challenge your taste buds this would do fine. For the humble blogger it is quite boring - 2 skumfiduser.

Alfa, 5% lager from Athenian Brewery (owned by Heineken, so now we can blame/praise the Dutch). The colour of Alfa does not differ from the two previous servings. The aroma is somewhat more indistinct with only some bread notes to be noted. The bread can also be detected in the taste which have a little more spicy and bitter ending than for the first two and is without any sweetness. To my surprise I will have to rate this a little better, so the verdict ends at 2-3 skumfiduser.

Santorini Blonde, 5% pilsner from Volkan. This sounds a little more interesting judging from the label; lava rock filtered water and addition of honey and citrus medica leaf. The appearance in the glass is not different from the other contestants. I do recognise a little more pronounced aroma of citrus. The mouth feel seems more fullbodied but that is just relative to the previous three. It contains some more complex notes with a mixture of bread, honey, corn and some spicyness. Only a very slight hint of citrus and the bitterness is less than Alfa. It differs from the others, but overall I do not find it very interesting. It can also be noted, that it costs three times more than the other three. 2 skumfiduser.

So among a very weak competition I liked the Alfa best - it was the least bad beer! 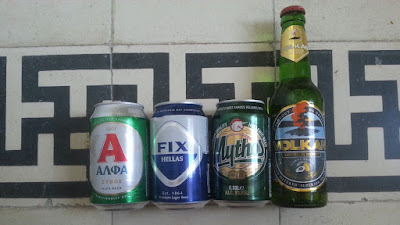